Getting Linux installed on an ancient MacBook 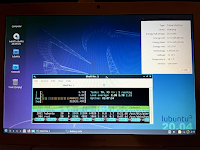 The Centon "Diamond Series VS1" 60GB SSD I tossed in my old MacBook about 6 years ago died suddenly and without warning. I happened to have a SanDisk 120GB drive I recently took out of a small server floating around, so I finally got around to getting Linux installed on this thing. (Typing this on it now.)

I've tried doing this before and always gave up. I wasn't sure if I had a USB drive that was compatible, etc. The key is patience. A lot of patience.

I started off with one of the Matt Gadient ISO images (specifically lubuntu-20.04.1-desktop-amd64-mac-mattgadient.com.iso), and followed the instructions found on Stefan's page. I used a 2GB partition on a cheap 16GB USB flash drive I had within arm's reach (it identifies itself as vendor_id abcd, product_id 1234, product "UDisk" manufacturer "General" ...).

When I booted the MacBook with the USB drive inserted, I smashed and held the Alt/Option key immediately after I hit the power button, and a few seconds later I had one option I could pick, the "EFI" drive.

Here's where patience was critical. I hit Enter and waited, and waited. With the dead Centon drive installed, it was at least 30 seconds before the screen changed and gave me any feedback. Likewise, booting the Lubuntu image off that cheap drive involved what seemed like forever of staring at a black screen, before anything displayed.

Finally, though, I was in a working Lubuntu 20.04 LTS environment. Shut the machine down, used a PH#0 screw driver to remove the little metal shield that allows access to the RAM and hard drive, used a tiny T8 driver to remove the Centon drive and swap in the SanDisk, rebooted with the EFI installer (which only took a second or two to do what took 30+ seconds when the dead drive was attached), partitioned the drive and installed Linux.

I hand-partitioned the disk to leave half of it free in case I want to re-install Lion at some point (I probably will). One thing I needed to do, that wasn't 100% clear, was to setup a small (I used 35MB?) EFI partition, mount point /boot/efi, file system type FAT32, and the "boot" flag must be set. (An error message I encountered said I needed to set the "esp flag" but that's not an option in the installer; the "boot" flag worked though.)

And, yeah. It's up and running, more than fast enough to be usable. Huzzah. 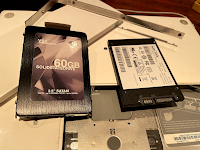 Firefox and LibreOffice are already installed, so I'm mostly ready to rock and roll. Will add PhpStorm and a couple of fonts and I'm up and running...