These aren’t affiliate links, just things I’ve found (mostly on chewy.com, as I’ve been boycotting Amazon since late June of 2019, long story) very useful in transitioning from a home with two known quantity adult dogs, to a home with a very young puppy. Hope they’re helpful to, well, anyone. Prices are what I paid at the time, not current pricing. 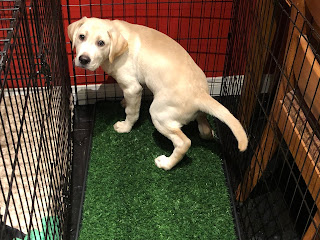 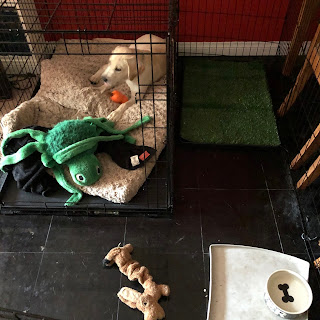 Some folks use a crate beyond the puppy months. I don’t. When my guy was using a crate, I had a whole little “apartment” setup for him:

While he’s still getting into and destroying things he shouldn’t, I’m using these to limit his access to areas I don’t want him to be unsupervised: 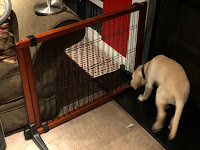 My dogs are easy, but benefit from:

My Labrador eats incredibly quickly. Too quickly. I tried this inexpensive slow feeder gizmo: https://www.chewy.com/loving-pets-gobble-stopper-slow/dp/47359 Not recommended; it’s a lot smaller than it appears to be, doesn’t stay put, and my Lab started eating it. I’ve since switched to:
Posted by Geek with Wings at 6:20 PM No comments:

I used to be a dog food snob. Only grain free. No corn (it’s like feeding your pup McDonalds! ... is probably something I’ve said, probably a lot). Etc. Taste of the Wild, EVO, etc. Most recently, Canidae Pure Elements. But then I started reading about dilated cardiomyopathy ( “DCM”). I think the first time I encountered it was in this thread on reddit.

The FDA has announced they are investigating DCM, and named a list of foods that had been, at least tentatively, linked to DCM fatalities: Arcana, Zignature, Taste of the Wild, 4Health, Earthbloom Holistic, Blue Buffalo, Nature’s Domain, Fromm, Merrick, California Natural, Natural Balance, Orijen, Nature’s Variety, NutriSource, Nutro, Rachael Ray Nutrish. I discussed it with my late Labrador’s oncologist (at a specialty practice; they don’t sell dog food, or AFAIK have any interest in what you feed), who wrote:


I am on a merciless crusade to re-educate the public that Purina, Royal Canin and Hills are veterinarian recommened for a reason and do long term feeding trials to prevent stuff like this from happening and employ veterinary nutritionists.  My dogs have always eaten Purina (either Proplan or vet diet like Bright Minds or tummy diet like EN) or Hills science diet any maintenance diet.  I think Purina is more palatable.

Our regular vet made the same recommendations, as did my mom’s dogs’ vet, when we happened to discuss dog food on a dive boat during a recent shark diving excursion. 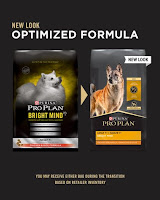 Meanwhile, my spoiled prince, an AKC registered Labrador puppy, started life on Eukanuba Large Breed Puppy, which the breeder recommended I discontinue at 6 months. I switched him to Royal Canin Labrador Puppy, which he loves (he has a slow feeder bowl, which helps a little, but he scarfs food down like, well, like a teenager). The feeding guidelines for that food call for it to be fed until 15 months, though everyone in the dog community seems to have an opinion as to when to shift off of puppy food. So I asked Royal Canin the “why” behind that cut-off. Their reply: “The reason for 15 months is the larger the dog the longer it takes for them to reach full size and adulthood. Though a Labrador maybe near full height at 7, 8 months they are still growing the muscles and nerves to support that size. The difference between the puppy and adult product is that the puppy will have higher Calories, Fat, and Protein amounts to support that growth.” So, there you have it. Oh, and here’s the brat:

Posted by Geek with Wings at 2:33 PM No comments:

Posted by Geek with Wings at 6:39 PM No comments:

I have a computer booting using Clover. It has this annoying thing where it boots into an installation partition, instead of my main operating system partition, unless I manually select the right boot partition at power-up. Makes remote rebooting (without, say, a net-enabled KVM, which I don’t have), a huge PITA. For the life of me I couldn’t figure out how to fix this, but now, with some guidance, I have.

Rebooting, and hoping it works! ...

Edit: It did not. Haven’t had time to investigate further.

Posted by Geek with Wings at 5:16 PM No comments:

Wearing the “COVID six,” I started riding my bike into the office again. Before (years and years ago), it was an awesome, fat-melting 17 mile trek down the beach into the south bay. Now, it’s 3 miles, but, better than nothing.


It’s still mostly stock, with some accessories added. A couple of years ago, I had Helen’s refurbish it to deal with years of beach riding abuse (corrosion on the cables, new handlebar tape, etc). I got a good deal on it; the next year’s models were already out and they needed to clear it off the showroom floor. I want to say I spent $700, against a sticker price of $1299? Anyway.
Accessories:

A lot of trial and error went into putting all that together.

My first commuter was a base model Specialized Sirrus I got for what seemed like, at the time, the astronomical price of $500. Picked it up the weekend after the bar exam, and started commuting (~5 miles each way) from Park La Brea to Century City, shedding some of the flub I’d put on over 4 years of working full time, law school at night, and then cramming for the GBX. That had a CatEye computer (basic), a mirror sticking out of one of the bar ends, a kickstand (?!), a pannier rack and pannier bags, and a top bag that sat on top of that rack, etc. I went through so many lights (front and rear), etc. Shimano ST-EF35 shifters, Shimano T-301 front / Sora rear derailleur, Specialized Forearm Sport, 28/38/48 crankset, 8-speed, 12-26 teeth rear cogs, 700x28c tires. This one had plastic pedals that disintegrated, so it ended up with Power Grips (that I later moved to the Trek 2100zr); now it's wearing some generic metal pedals as it’s only really cruising between hangars at the airport.


Posted by Geek with Wings at 4:49 PM No comments:

After my ArkaHosting VPS went deadpool, BanditHost seemed solid, so I setup a fairly massive database and front end on a virtual server there. It’s been offline for a few days and I finally had a minute to dig into it. Yup. They’re dead, too. Ungh. I do not have the time to populate that massive database again (it’s dozens of gigabytes). At least I have the code backed up, and the MariaDB instance on the VPS was a slave being populated by a master I host on a RAID-equipped Linux server at home.

Posted by Geek with Wings at 11:20 AM No comments:

Hmm. Was about to pull the trigger on the well-reviewed Logitech M585 (this “work from home” thing has me wanting a Bluetooth mouse I can easily swap around from computer to computer), until I read this:

This mouse requires that your PC be compatible with BLE (Bluetooth Low Energy) technology. If your computer doesn’t support this, you will have to use the Unifying receiver with this mouse. BLE is also referred to as “Bluetooth Smart.” If your computer was manufactured in 2016 or later, you can expect it to be compatible. Higher end machines from 2015 support this technology, while it was an uncommon option in 2014.

Probably not a great fit for my circa-2013 MacBook Air or my “Mid-2010” iMac ... Sigh. Back to the drawing board. Probably just pick up another cheap Insignia. They work surprisingly well, and if I have two of ’em, the pain in the ass factor of swapping between two computers using Bluetooth becomes a non-issue.
Posted by Geek with Wings at 11:54 PM No comments: